Thoughts on the Chenrezig Nuns Community, Queensland, Australia
Written by three members of the community

Chenrezig Nuns’ Community was established thirty years ago by Venerable Ann McNeill under the advice and guidance of Lama Yeshe and Lama Zopa Rinpoche.

Since then there have been different Geshes and nuns living here and the daily life has changed accordingly..

Presently our most senior nun is Venerable Margaret McAndrew. Ani Marg as she is affectionately known, is well respected by all for her even mindedness, approachability and care she portrays towards us all as if she was our mother. Ani Marg was one of the original Foundation for the Preservation of the Mahayana Tradition (FPMT) and Chenrezig nuns, she took ordination as a Getsul with Trijang Rinpoche in 1976, having had taken Rabjung vows the previous year, Ani Marg holds a vital part in our community and also as role of disciplinarian. 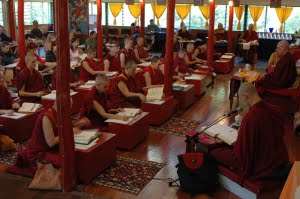 Geshe Tashi Tsering is our kind and precious teacher and guru, and has been the resident teacher here for the past eighteen years. Geshela’s wise presence and perfect explanation of the entire Path to Enlightenment plays a pivotal role in our lives as he continues to inspire us with these precious teachings helping us to deepen our service in our community and lives as monastics.

Geshela skillfully teaches us from his own experiences and training as a monk. Geshela entered monastic life at the age of seven years in Kham in Tibet in the 1940’s, and the wisdom of his Lharampa Geshe studies at Sera Je Monastic University in Tibet and India continues to move our minds.

Geshela has an in depth understanding of the western mind and the challenges of life as a western monastic. Geshela’s great understanding for establishing Buddhism and monasticism in the west was enriched by his experiences of helping to restablish Sera Je Monastery in Southern India.

Geshela often says that our best protection is loving kindness and mind training and that it is important that we respect and mentally prostrate to each other. Geshela says that at his home monastery in Kham, they were always encouraged to mentally prostrate to whomever was sitting on either side of you and to hold them in pure view by only observing others qualities and not looking at their faults.

Our daily lives here at Chenrezig revolve around trying to put Geshela’s heart advice and teachings into practice. The essence of being a Chenrezig nun is abiding within the teachings by listening, contemplating and meditating, and then putting this into practice in our everyday lives with those individuals around us.

Geshela can be described as having encompassed the Kadampa teachings of old, and he supremely teaches by example, thus encourages us to live within the vows of our ordination and to practice and study the entire path to enlightenment. Most of our time is spent studying the five year Buddhist Studies Program which is now in its third cycle. Our module topics include Grounds and Paths, Signs and Reasons, The Wheel of Sharp Weapons, Mind and Awareness, The Ornament of Clear Realisation, The Sublime Continuum, The Lower and Higher Tantras, The Bodhisattva’s Way of Life, The Heart Sutra and the nine month Lam Rim Chenmo teachings that will be taught for the second time and will encompass the 2009 teaching schedule.

Geshe Tashi Tsering is supported in teaching the BSP by Geshe Lobsang Jamyang who acts as a tutor for the BSP and teaches the general program twice a week and monthly weekend courses. We are unbelievably fortunate to have two Lharampa Geshes encompassing the old and the new Tibetan Buddhist Tradition, who guide us with their wisdom.

Our daily lives and routines vary from individual to individual. Some study Tibetan language, others focus on the wider community when time permits (outside of our BSP) working as nurses in local hospitals and for the two FPMT hospices – Karuna in Brisbane and locally at Cittamani and teaching Buddhism in local schools. Others’ work is more community focused around Chenrezig Institute itself as Gompa Manager, SPC, Resident Western Teacher, and others serve as our Geshes’ attendants.

Venerable Yeshe Khadro who was one of the original Chenrezig Nuns nurtured the seed of this community, and acted as the director of Chenrezig Institue for a period. She now devotes her time selflessly as director of The Karuna Hospice, where the hospice provides amazing service in palliative care.

Our intention is to serve this Dharma Centre, to bring happiness to the minds of those who visit our centre, to work in harmony with all those we come into contact with, each other the volunteers and visitors. Studying in order to train our minds in the stages of the path, hopefully gaining realizations on the path as we progress, so we can live the  Dharma enabling it to flourish and thus being of benefit to all sentient beings in all of the six realms of existence until they achieve enlightenment.