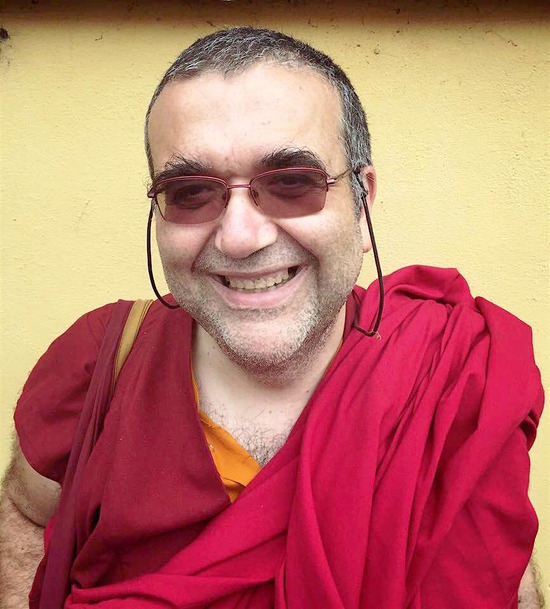 Venerable Paolo took vows with Lama Zopa Rinpoche in September 1989 and subsequently the Gelong vows from His Holiness the Dalai Lama. He stayed at Lama Tzong Khapa Institute near Pomaia in Italy for many years following teachings from Geshe Jampa Gyatso, of whom he was a disciple, and completing the Masters Program.

In worldly life, Ven Paolo had a degree in anthropology and worked as a librarian at Perugia University, as well as at ILTK, working for several years helping to catalogue and put in order Buddhist and oriental texts. He was an avid reader, researcher and keenly observant studying with enthusiasm an eclectic mix of disciplines including oriental medicine, astrology, feng shui, mathematics and literature: he had a Masters in Traditional Tibetan Medicine.

His thought was original and often swam against the current, sometimes causing “strong” debates. However, Paolo was gentle and affectionate, speaking freely with guests at ILTK who wanted to exchange ideas or have some of their doubts answered. He made frequent trips to the East for extended periods and sometimes dropped off the radar to the point that he was considered missing. His last years were spent in Sera Je where he was learning Tibetan and living in close contact with the monastic community.

Ven Paolo had a heart attack and left the body on June 27th 2016 at the home of friends in Perugia. He was 54 years old.