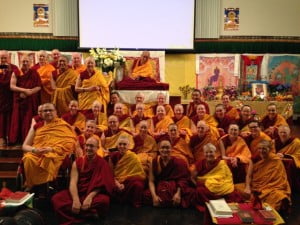 When I walked into the dining room at the Blue Ridge Assembly in North Carolina on the morning that the Light of the Path retreat was scheduled to start, it took me about 20 minutes to walk through the room to the buffet – the room was full of old friends, some of whom I hadn’t seen since the late 90s. There was a buzz of excitement in the air as we were gearing up for two weeks of amazingly inspiring teachings by our Kyabje Zopa Rinpoche, and looking forward to the experience of being together with our extended FPMT family, sharing this incredible experience. To me, the retreat felt like a cross between a Kopan course, a CPMT meeting, and a family reunion!

Participants came from all over North America, with a large contingent also from Latin America: Mexico, Colombia, and Brazil. Students also came from as far away as Europe and Australia. There were well over 200 participants, and among these were 27 nuns and seven monks.

The day was full, with Lama Chopa Puja starting at 5:00 a.m., and sometimes continuing on throughout the day. This was ably led by Ven. Steve Carlier and Ven. Sarah Thresher, with assistance also from Ven. Chantal and other monastics. Geshe Gelek from Kadampa Center led some question and answer sessions in both the morning and the afternoons, and Ven. Steve reviewed Rinpoche’s teachings and fielded questions during the morning session, before lunch. Senior students led discussion groups in the afternoons as well, and Ven. Amy Miller led a morning session for the new students for most of the retreat, by special request, as many students there had never received teachings at all, or were still quite new and unfamiliar with the lamrim.

“I was deeply moved by the presence of so many IMI sangha at this year’s Light on the Path retreat. It wasn’t simply the gorgeous glow of yellow and burgundy at the front of the gompa. Not to mention Ven Steven’s gentle and insightful reflections on Rinpoche’s teachings, the haunting chanting of Ven Sarah, and the amazing typing skills of Ven Joan. There were so many instances of sangha service to rejoice about, both visible and behind the scenes. When it came to the final puja, I experienced a sudden rush of confidence and pride that, through the great kindness of our teachers and the dedication of our monks and nuns, the FPMT is now genuinely capable of preserving the Mahayana tradition for future generations.“ Alison Murdoch

Rinpoche taught most afternoons and evenings, sometimes also joining us for     the morning session, and even for the 5:00 am session a few times. One morning, Rinpoche gave the lineage of the Mahayana precepts, which he mentioned he hasn’t done in quite a long time.

Rinpoche focused his teachings on the Bodhicitta Mindfulness practices from the Sutra of Clouds of Sublime Rare Ones and his own instruction. Rinpoche also taught extensively from A Glance Meditation on All the Important Points of the Lam-Rim by Dorje Chang Lobsang Jinpa, which he also retranslated as he was teaching. Rinpoche also taught on guru devotion for several sessions, and included an explanation of the absolute guru and the extremely subtle mind.

Rinpoche also gave an explanation on eating yoga to those who had received Highest Yoga Tantra empowerment. Halfway through the retreat, Rinpoche bestowed Vajrasattva empowerment. And the last night, in a glorious grand finale, Rinpoche gave the oral transmissions of many texts (in both Tibetan and English) and mantras, and gave us extensive practice advice. Just like old times, this session ended in the wee hours of the morning, after everyone had had a chance to offer a khatag and pay their respects to Rinpoche… and after extensive dedications, of course!

“What an incredible experience to spend two weeks with our Precious Guru, listen to teachings and spend time with our awesome FPMT family. I rejoice! I was especially happy to be sitting in the blissful sea of flowing red and yellow robes. This is my karma; to always be happily surrounded by beautiful members of the Sangha.“  Drolkar McCallum – FPMT North America – Regional Coordinator

In fact, it seemed that the only thing Rinpoche did not have a chance to do is begin teaching the main text, Lamp for the Path to Enlightenment, by Lama Atisha…

In addition to all these amazing teachings, many meetings were held, both formal and informal, to discuss FPMT business. Tom Truty, Merry Colony, and Kendall Magnussen, representing the FPMT Education Department, were in attendance, as well as Alison Murdoch, outgoing director of the Foundation for Developing Compassion and Wisdom (UE) and Drolkar McCallum, the North American regional representative. Ven. Chantal Carrerot, the IMI director, and Ven. Lobsang Chodron, the North American IMI representative, were also there. And of course the FPMT CEO, Ven. Roger Kunsang, and his assistant Ven. Holly Ansett were meeting with center directors, teachers, and students constantly, so much FPMT business was conducted as well!

Tom Truty called a meeting of the FPMT registered teachers, to try to get an idea of how the Education Department could better serve them. Another meeting of the Discovering Buddhism teachers was also held. Ven. Chantal called a meeting of the sangha, in order to get feedback from us about our most pressing issues, so that she could incorporate these into her presentation for the CPMT meeting in Australia later this year. After our sangha lunch with Rinpoche, held in a private room on one of the final days of the retreat, Rinpoche asked to hear our concerns and the feedback from this previous meeting, and we had a very beneficial discussion, with Rinpoche asking us questions and many of us having the opportunity to explain the issues to Rinpoche, and receive his advice.

The main retreat organizers, Mer Stafford and Sarah Brooks, did an amazing job making sure everything ran smoothly, assisted by many many volunteers from Kadampa Center. Victoria Clark organized rides to the venue and back to the airport for all the monastics – big thanks to Victoria! And the media team made sure that the teachings were not only captured on video, but that Rinpoche teachings were live-streamed all over the world for the benefit of those who could not be in attendance. Ven. Paloma translated for the Spanish speakers, and Francois and Violette from Institut Vajrayogini translated into French.

Kadampa Center has invited Rinpoche back again to continue the teaching next year, so we’re all waiting for the dates. If you didn’t get a chance to attend this year’s event, my advice is to do whatever you can to make it to the next one! It is an experience I will never forget.

Hard Lesson from the Fire

Monks and Nuns are at the Heart of the FPMT