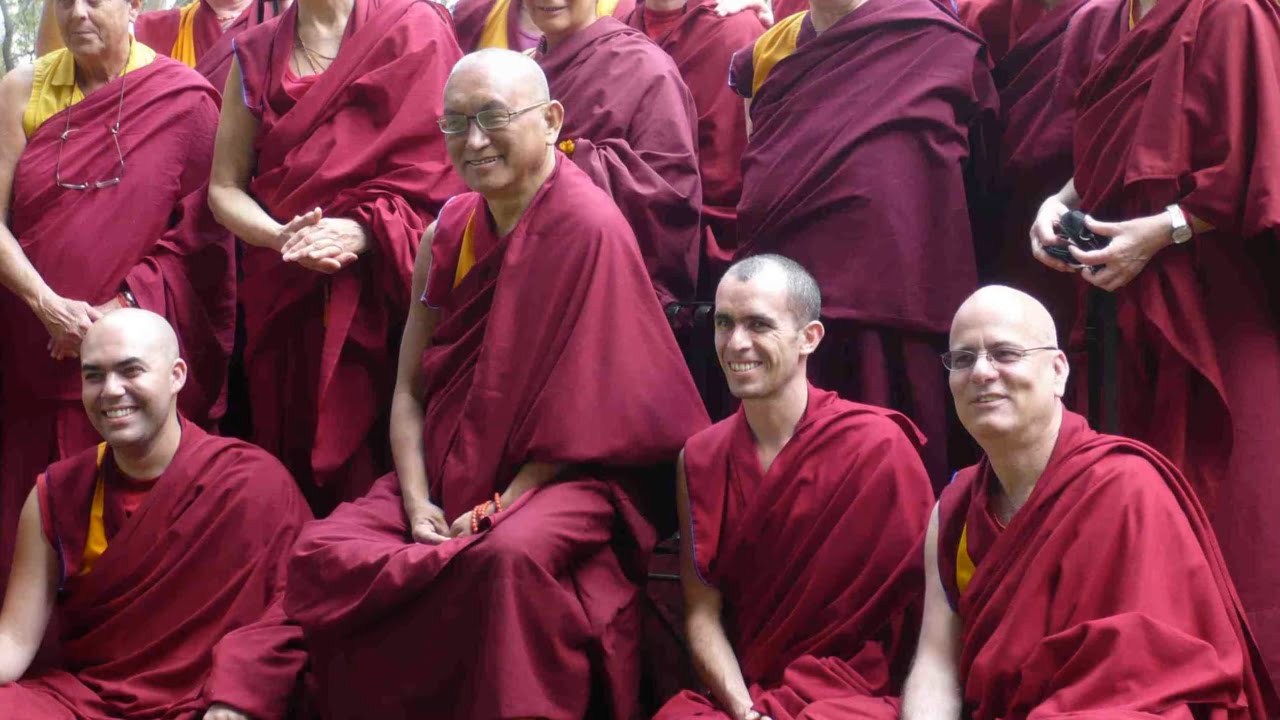 posted by admin
From the bottom of my heart I would like to thank very much all the Sangha who for so many years, not only living in, guarding, your vows, but able to benefit others – doing retreat continuously for many years or doing social service, doing hard work at the center, doing service to sentient beings and teachings of the Buddha, which is service to our guru, His Holiness Dalai Lama.
Lama Zopa Rinpoche

Of course in the West it isn’t easy [for Sangha]. I think in Chinese countries it’s a little easier because the society respects the Sangha, offers service to the Sangha. I discovered in recent times that there’s some differences for Sangha being in the West and Chinese Sangha in China or Taiwan. We have some Sangha, monks, nuns in Taiwan, so by looking I noticed that there’s more security there, more safety, I think because the society has respect. There has been one or two disrobed, those who in early times became monk or nun, but this can happen, it’s natural if very young. So I noticed that Sangha is able to last longer, especially those who kept living in Taiwan, in that culture. The conditions – culture, society, are somehow easier. So I wanted to express this which I discovered recently in Taiwan by comparing, looking at the situation.

I think in the West it’s quite different, the culture is quite different. It has gradually been developing respect to Sangha, which there wasn’t for many years. In Western society, the life, and culture here, it’s not easy, I think it’s a challenge being in such a country where the culture and everything is totally there to develop delusion, like exploding delusions, to bring out delusion. Everything is like that. So I would say that it is incredibly heroic, brave, to be in such a country, in such a culture and to be able to stay as a monk or nun. I think it is great, these beings are unbelievable heroes; in Tibetan it’s called ‘pawo’. Obviously it is easier in a place where there are no obstacles, it’s easier in an isolated place where there are only Sangha, nothing else. By mixing with people who have a totally different culture, and then being able to live in your practice, the vows, well then that’s being a really great hero, that’s a great challenge. This hero is unbelievable. This is the hero over the delusions, not a hero from killing many millions of people, the hero regarded by worldly people as a hero.

Here, this is a real hero – the real hero is a hero over the delusions, who is able to conquer the delusions. You have given freedom to yourself, not allowing delusions to have dictatorship over yourself: no, you become the controller, it’s the other way around, which brings liberation, enlightenment to yourself and through that to others, to numberless sentient beings. So I think that’s unbelievable, those beings are really, really heroes. In those countries where people get army badges having killed probably thousands of enemies, and then are regarded as a hero by common people in the world, but actually that person is a loser, because you have all this negative karma left to experience, the result is sufferings for hundreds of thousands of life to life because karma is expandable and then also there are lower realms sufferings for unconceivable length of time. If you are born a human being due to another virtue, another good karma, you will have to experience the result similar to the cause of killing, then creating the results similar to the cause – again doing the action of killing and the results to do with the place, all those sufferings you have to experience, and not just one time, but for hundreds of thousands of lifetimes, because karma is expandable. So that’s the reality, that’s the great loser, you become the defeated.

From the bottom of my heart I would like to thank very much all the Sangha who for so many years, not only living in, guarding, your vows, but able to benefit others – doing retreat continuously for many years or doing
social service, doing hard work at the center, doing service to sentient beings and teachings of the Buddha, which is service to our guru, His Holiness Dalai Lama. Fulfilling His Holiness’ wishes, that’s not the issue, not the important thing because every single understanding of BuddhaDharma that we have came from His Holiness the Dalai Lama, by the kindness of His Holiness the Dalai Lama. Every single purification that we do in our daily life by understanding the lam-rim came from the kindness of His Holiness the Dalai Lama. Every single merit we collect is by the kindness of His Holiness the Dalai Lama. Buddhism exists, Tibetan Mahayana Buddhism in particular exists in this world due to His Holiness’ kindness, exists and flourishes so far. Then having met with Dharma at FPMT centers, that is due first of all to His Holiness’ kindness and second, of course, to Lama’s kindness. Even though many people haven’t met Lama, he passed away so many years ago unfortunately but his activities are still happening. All the centers still exist and continue due to Lama’s kindness, his compassion, are the result of his compassion, and his activities still happening. So that’s due to Lama’s kindness, second. Then of course there are resident teachers, third – having met perfectly qualified resident teachers – Khensur Jampa Thegchog, Geshe Ngawang Dakpa, Geshe Tsulga and so forth, all this is also a result of Lama Yeshe’s kindness.

What I want to say is that to be able to meet qualified teacher is by Lama’s kindness. First His Holiness Dalai Lama, then Lama Yeshe’s kindness, so that’s very clear, that’s the evolution.

So, the Sangha living in their ordination, on the basis of subduing one’s own mind then benefiting other sentient beings. The lay people also living in vows, protecting their karma, and on the basis of that Dharma practice, the practice of bodhicitta, doing Dharma studies and doing whatever, social service, service to sentient beings and the teachings of Buddha, the many various activities of the center, the organization, taking responsibility. So that is repaying kindness to our kind and compassionate guru Shakyamuni Buddha, His Holiness and Lama Yeshe.

Also the resident teachers – you put into practice whatever one can from what they teach and always learn Dharma as much as possible and reduce ignorance as much as possible, every time one hears Dharma we have less ignorance, then from that correct practice, correct realization comes, then liberation, enlightenment comes: so we are repaying the kindness of the resident teachers’ service as well.

FPMT is extremely fortunate, unbelievably fortunate that we have many qualified teachers, resident teachers who have spent life in a monastery on the basis of living in vinaya, guarding one’s vows, one’s mind. And then extensively studied Buddhist philosophy, the whole path to enlightenment, the four noble truths. And who are not only scholars but are living in practice – that is an extremely important moral for us. So therefore the organization is very fortunate, extremely fortunate. If you look at others, no question if they are not Buddhist,but even other Buddhist organizations, if you look then you can understand how fortunate we are having many qualified teachers, having the opportunity to study. Through that we are able to offer service to the world, to sentient beings: with our Dharma knowledge and practice we can enlighten other sentient beings, liberate others by giving Dharma education, by giving the light of Dharma to others, in their heart. In minds which are dark, where there is ignorance, we bring the light of Dharma there, bring the wisdom eye. I think that’s the best service to sentient beings, the best service to the world.

The whole global problem is a lack of understanding Dharma, due to ignorance. A lack of understanding karma, lack of good heart: the whole problem in the world is that, whether we are talking about environment problems, global environment problems, that the cold place is becoming hot or whatever, all these issues are also due to karma. The root is ignorance and self-centered mind, including environmental problems. The entire problem is that, came from that. So therefore I think learning Buddhism and practicing, especially lam-rim, the whole 84,000 teachings, all the extensive BuddhaDharma, integrating the lam-rim and putting it into practice, that’s the best, best life. The richest life, the most meaningful life in the world. That’s the main answer to world problems. So what the centers do, ourselves learning, practicing, and giving wisdom to others, Dharma training to others, an understanding of karma and so forth, bodhicitta and so forth, I think that is the best. Through that they achieve liberation, total liberation from whole entire oceans of samsaric suffering and achieve to enlightenment. So that is where we lead them to. So our activities, what we do is most urgent, an emergency, the most important thing for ourselves and for sentient beings.

Thank you very much. 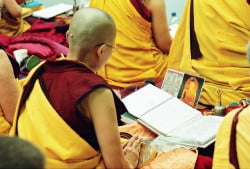 A Panacea for the Disturbed Mind