Skip to content Skip to sidebar Skip to footer
Close International Mahayana InstituteSangha Jewel – A Community Of Buddhist Monks And Nuns
05
July
posted by admin
Although the majority of the millions of Buddhists are lay people, it is taught that the ordained Sangha are crucial: The existence of the Buddhadharma in any one place depends upon the presence there of at least four ordained Sangha practicing the full extent of the vinaya, Buddha’s guidelines on moral conduct. Lord Buddha himself said, “Wherever there is a bikkshu observing the vinaya, that place is luminous, is radiant. I see that place as not empty: I myself abide there peacefully.”
Ven. Robina Courtin, Mandala Magazine

About a month after I took over as Director of the International Mahayana Institute (IMI), the community of Buddhist monks and nuns in the FPMT mandala, I was reading a Sunday news magazine and the feature story caught my eye. The article was about a small community of Catholic nuns in the Bay Area, and how they were surviving in a more secular society. Seeking to understand the parallels to the difficulties faced by the modern Buddhist monk or nun, I had to read the article, especially in light of Lama Yeshe’s early advice for our community to look at the Catholic community as models for our own.

The Catholic nuns’ community had similar difficulties to those that our community faces today – a more secular society, an aging population, etc. – but the one sentence that captured my attention and intrigued me more than anything was ever so simple: Each of the nuns who were out working (for the diocese) in teaching positions, etc., were supporting 2.7 members of their community.

I have often noted that Lama Zopa works in mysterious (and sometimes very unconventional) ways, and I believe it was due to his kindness that I happened to read this particular article on this particular day. This singular simple fact of community opened my mind to propel a tremendous shift that could help the community of monks and nuns whom I was asked by Rinpoche, only a few weeks before, to serve. The insight has given focus to the main task as the path begins to take shape.

Having some experience as a monk living in a residential center in the West, I had already formulated thoughts on the vulnerability we face in a culture that does not value (i.e. support) the decision we make in becoming monks and nuns. But I also needed to hear from the rest of the monks and nuns in the larger world community about their experiences and their situations: the difficulties and the priorities. A survey was compiled, providing an in-depth look at the individual situations for members of the community: those living in community and those on their own. With a fifty percent response rate, the results seemed credible.

By chance, in serving my teacher Ven. Geshe Ngawang Dakpa I also had the opportunity to travel to many parts of the world and meet with my fellow Sangha members; to talk to them in person and listen to their stories. I have also taken the time to discuss the Sangha with staff at FPMT international office, teachers (and abbots) within the FPMT mandala of centers, my predecessors who served the IMI community, as well as Lama Zopa Rinpoche.

And I went back to the beginning! What did Lama Yeshe say when he started this IMI thing? What did he really envision for the community of monks and nuns?

Of course I also had to review my understanding of the Vinaya, the code of conduct for monks and nuns. My time spent in a Tibetan monastic community (Sera Je Monastery) every year for the last five years has also provided tremendous insight into the unraveling story of where do we go from here.

It is not always a good thing to air dirty laundry for everyone to discuss; however, in some cases, it also helps to provide an understanding of the underlying current, and thus can be helpful in shifting our awareness.

It’s enough to turn your head inside out! Where to begin?

And this is where it all seems to fall into place! The emphasis on the individual does not benefit the lay community, the organization, or the monks or nuns. The only alternative we have is community – it can work! But it will take a tremendous shift in attitude on the part of FPMT, the center communities, and the monks and nuns of IMI.

While from an individual point of view it certainly is not our ideal scenario, in all other Buddhist traditions one joins a community when one ordains. This community then serves as one’s family, as one begins one’s journey as a monastic and at various stages of one’s life. Learning to live in community is not always easy; in fact, it is a major part of practice as a monk or nun seeking to put the Buddha’s teachings on selflessness into action.

Lama Yeshe stressed the importance of communities in his first talk: “My feeling is that it would be much better if the Sangha were to stay together, communicating with each other, rather than people getting ordained and then going off on their own. If you do go off on your own, worldly conditions will make your life difficult; it will be much harder for you to practice Dharma.”

As Lama Zopa puts it, we need “different flavors, like ice cream” for our communities to suit the various temperaments and capacities of the monks and nuns. Over ten years ago, Lama Zopa Rinpoche indicated that he would like newly-ordained monks and nuns to commit themselves to living in a Sangha community, or similarly conducive environment that supports subduing the mind: five years for a monk and four years for a nun. There needs to be balanced education available, not just philosophical study, to produce good monks and nuns. Rinpoche has said, time and again, that the main protection for one’s ordination is the study and meditation of lam-rim, to generate some experience.

Again Lama Yeshe states, “If monks are nuns have difficulty just keeping their physical lives together, how will they ever get the chance to study and retreat? The strength of the Sangha community is that it ensures that everybody has a chance to take teachings and retreat; it makes sure that everybody is okay, and minimizes the external conditions that cause one to lose mental discipline. I think this is really worthwhile. It helps a lot. There’s a Sangha vibration, you see; when you look at each other, there’s a vibration that automatically helps you control your energy. You should check this for yourselves.”

And no, not everyone is expected to go off and live in a community for the rest of their life. Rather, we shift our attitude and recognize the importance of community, the responsibility we have to support and nurture each other as monks and nuns. This was so clearly stated by Geshe Lama Konchog: “… only if the individual members of the Sangha community start looking after each other and take responsibility to provide for the community financially, will substantial help come from the lay community.”

And this idea of community is very subtle, from the offerings made to the teacher, who in turn gives back to his/her community, to the center director who respects and values the service offered by the individual monk and nun, and commits not only to the basic needs of here and now, but also their future. Even the support offered by the Lama Yeshe Sangha Fund must embrace the concept of taking care of community, and not individuals.

It’s difficult to change our way of thinking, and challenges lie ahead. And to be sure, it will take on many forms: the development of actual communities, education and training, communication, and attention to isolated members of the community.

In Praise of Vinaya states: “As long as the complete vinaya, the supreme treasure, abides, the lamp of the Dharma will shine.” The “complete vinaya” refers to all the rules of moral conduct, from those for lay people to those for fully ordained monks and nuns. In other words, if the laws of moral conduct of fully ordained monks and nuns are no longer held by anyone, the Dharma itself would no longer exist. 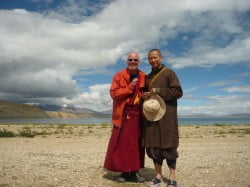 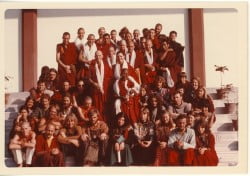