Kopan Monastery becomes the first monastic community established by Lama Thubten Yeshe. It has its beginnings in the Solu Khumbu region of Nepal. Lama Zopa Rinpoche, the reincarnation of the Lawudo Lama, a yogi of the tiny hamlet of Lawudo, fulfilled the promise of the previous Lawudo Lama to start a monastic school for the local children. The school was called Mount Everest Center. The 25 monks spent the winter months at Kopan, located on a hilltop just ouside Kathmandu, Nepal, finally moving down fulltime in 1973. 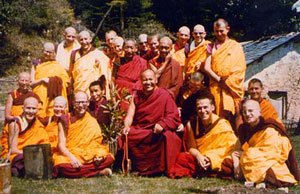 An IMI branch is established in Dharamsala, India where monks and nuns undertake study and retreat. 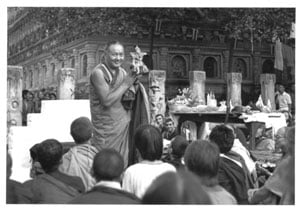 Lama Yeshes moves many of his activities to Manjushri Institute in the UK, including IMI. Twenty-five monks and nuns study the Geshe Training Program with a core curriculum on Buddhist philosophy, including Dura, Drubta, Lorig, Tarig, Salam, and Seventy Topics.

The first IMI bulletin is produced, in September.

In what is a revolutionary proposal, Lama Yeshe for the first time invites a Tibetan nun to join Kopan monastery and study with the monks, Ven. Tsenla, and instructs her to build a monastery for Tibetan nuns.

Ven. Elizabeth Drukier, director of Institut Vajra Yogini in France, buys an old manor farmhouse in the countryside, in Marzens, near the institute, in response to Lama Yeshe’s appeal for a place for the IMI sangha.

Lama Yeshe organizes the first Enlightened Experience Celebration in India, with his monks and nuns in mind. Some 130 IMI sangha attended, along with up to 700 laypeople. The five-month series of teachings, initiations and retreats were given by His Holiness the Dalai Lama, Song Rinpoche, Ling Rinpoche, Serkong Rinpoche, as well Lama and Lama Zopa Rinoche. They were held in Bodhgaya and Dharamsala.

Lama Yeshe invites for the first time His Holiness the Dalai Lama to teach in Europe, where His Holiness visits, among other sites, the FPMT center in the mountains outside Granada, which he names Osel Ling. Also, His Holiness stays at Nalanda for two nights; and teaches to 700 at Istituto Lama Tzong Khapa.

Lama Yeshe gives a talk in September to monks at Nalanda Monastery stressing the importance of harmony in the community. He offers advice for dealing with the delusions of mundane life in a monastic setting.

Lama Yeshe passes away in March, in Los Angeles, California. Lama Zopa Rinopche takes on the role of Spiritual Director of FPMT, including IMI.

At the CPMT meeting in July, the care of IMI sangha at FPMT centers is discussed. On the basis of the discussion, the first sangha policy is established and included in the FPMT Handbook.

The eighty nuns of Khachoe Ghakyil move into their own premises in the valley below Kopan. 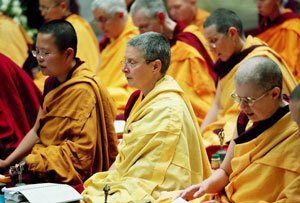 Currently, there are 150 IMI monks and nuns. Since the first ordinations in 1970, of the 225 western men and women who have taken vows, seventy-five have disrobed.

Lama Zopa Rinpoche indicates that he would like newly ordained monks and nuns to commit themselves to living in a sangha community, or similarly conducive environment that supports subduing the mind: five years for a monk and four years for a nun. There needs to be balanced education available, particularly for those first years, Rinpoche said. This education does not just mean philosophical study, but a balanced education to produce good monk and nuns. Rinpoche has said time and again that the main protection for one’s ordination is the study and meditation of lam-rim, to generate some experience.

The FPMT Board of Director, in September, discusses the situation of the IMI sangha at its annual meeting.
Thubten Shedrup Ling monastery, now constructed, is officially opened.

Ven. Chantal Tenzin Dekyi is appointed Director of IMI by Lama Zopa Rinpoche. She encourages communications among the sangha and the coming together of the IMI communities and individuals. A proposal is made to create a position with FPMT International Office to take care of all IMI monastic activities.

In February, IMI monks and nuns in attendance at His Holiness the Dalai Lama’s teachings in Dharamsala take the opportunity to meet and talk.

During the Mahamudra retreat led by Lama Zopa Rinpoche in Adelaide, South Australia, the IMI monks and nuns gather at a special meeting requested by Rinpoche. Discussions take place on the care of our sangha and the needs of an aging sangha community. 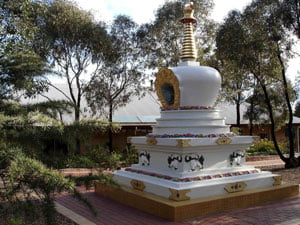 IMI monks and nuns participate in a discussion on ordination policy at the FPMT Geshe Conference held in Sarnath, India, December.

In May, Ven. Losang Monlam is appointed Director of IMI by Lama Zopa Rinpoche.

On January 28, IMI was formally registered as a non-profit organization, in San Francisco, California.

In December,  IMI was recognized as a church or religious order by the United States government and granted 501(c)(3) non-profit tax exempt status.