Kopan Monastery was the first community of monks established by Lama Yeshe and Lama Zopa Rinpoche. In 1971, 25 monks moved down from the Solukhumbu region of Nepal to the small hill overlooking Boudhanath; and thus the beginning of the largest community of monks of FPMT today.

It was at Kopan Monastery that the first IMI western sangha community was established in 1974. There a group of about 20 monks and nuns from around the world pioneered a program of study, meditation, and communal living. In 1976 in Dharamsala an extension of the IMI sangha group was established and for the next years, IMI activity was based in India and Nepal. 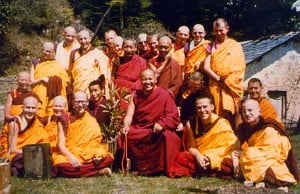 In 1981 IMI established Nalanda Monastery in France. In 1982, as a means of drawing his sangha together, Lama Yeshe organized the first Enlightened Experience Celebration (EEC), which was attended by about 100 monks and nuns. After the EEC, several monks returned to Nalanda. A group of nuns established the Dorje Pamo Nunnery at the nearby Vajra Yogini Institute. As students among the FPMT mandala of centers took a deeper interest in practicing the Buddhist paths as guided by their teachers, many became ordained, and the nucleus of many of the communities today were grew.

Dharma centers like to have Sangha members living and teaching there. This is actually very beneficial for the environment since due to the presence of Sangha, the lineage of the Buddha’s teachings is present in that country. The presence of Sangha preserves the lineage of the Buddha’s teaching and establishes the cause for others to have a precious human rebirth in the future. This is a great responsibility for the Sangha, because it can actually establish the cause for a precious human rebirth not only for humans, but for nagas, pretas, and other beings.

Lhungtok Choekhorling Monastery www.sangha.it (monks and nuns, future monastery in construction which will include the existent nunnery Shenpen Samten Ling Nunnery and the current monastery Takden Shedrup Dargye Ling Monastery which are listed below. The new monastery will be established at about 1,7 km north from Istituto Lama Tzong Khapa). info@sangha.it

In addition to the above sangha communities, many of the monks and nuns of the IMI live in residential communities of the FPMT.