Some Thoughts About the Vinaya Class in Instituto Lama Tzong Khapa 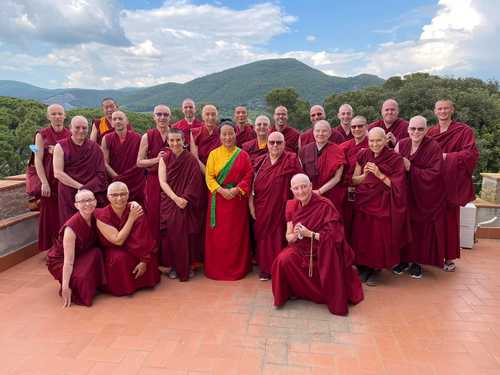 Three month Vinaya class in Mulasarvastin lineage, – wow. Immediately I was excited.  And teachings on the Gelongma vows – what a precious gift for a nun who was ordained only after retirement and who has had the good karma to also have received the Bhikshuni vows in the Dharmagupta tradition. So, of course, I signed up and I also decided to participate partly in person, to meet the Sangha at Instituto Lama Tzong Khapa.

Firstly I participated online, from home. Geshe-las teachings are very precise. And I am extremely impressed by the way all our questions are answered. Very extensively, very precise, very patiently each question is taken and an appropriate answer is given. And I just start to get glimpse of how vast the topic of Vinaya is.

When sitting in front of my laptop, it feels like I would like to crawl inside of it and be part of the teachings in presence. And it almost feels like the times of the Buddha are becoming alive again. All the first Bhikshus, who joined the community, to whom the Buddha just said “come” and they went forth, are coming up in in front of my mental eye. A little bit it is like a mental travel back in these times. My mind is full of pictures of people wearing robes, monks and nuns, who went forth, who followed the teachings and who spread the teachings.

It is becoming clearer and clearer to me, the best ways of living as an ordained person is as part of a Sangha community. To live alone with only lay people, even within a center, is not very conducive to ordained life.

Forming an ordained Sangha in the west is not so easy. Westerners are not so used to the type of community life. And people in the west are often ordained at a later age, having already quite some life experience. They are not unexperienced youngsters that can be educated and fitted into a given scheme. Westerners might have quite some experience and knowledge about the Dharma before seeking ordination. That has to be taken into account. It is different from the Tibetan procedure, where often children receive their Novice Ordination at a very young age and then enter a monastery.
Maybe new ways have to be found, another balance of giving some space for individual existence and community life, a new balance between individuality and communal life. Maybe there have to be times for common activities, like pujas and lunch, and of cause the Sangha functions. Maybe there could also be space for individual meals, study and meditation time. Some could live closer together within one building or in own small huts, maybe there could be a choice. And clear structures need to be established, with responsibilities assigned to different people. Maybe we could take a look at organizational structures in companies and learn from them. Some jobs also could be rotated through the Sangha. I definitely think it is possible to find ways of forming a western Sangha, being organized by using a blend of the traditional structures and modern organization theory.

Sometimes, when listening to the list of possible downfalls and defeats, I felt fear. Oh, no, how horrible, I definitely do not want to end up in the lower realms. Then, the next thought: I am a western educated person and I am not going to let myself being governed by fear. Why do they emphasize fear? That is not in accordance with western style of education. No, not with me! But then, again, the next thought after that: what else but fear is the reason for taking refuge? Sometimes we westerners don’t like to hear something like this. And from my own experience I can say: when I am afraid of getting seriously sick, my practice becomes more intense. So, in the end, I do welcome a helpful amount of fear in my practice.

And then, the question of full ordination for women. A high percentage of dharma practitioners are female. How can it be acceptable to have no full ordination for women? And don’t we want to live in a central land, meaning to have a Sangha of fully ordained monks and nuns? The ways, how this could be achieved are known. They are also described in “The Buddhist Nun’s Ordination in the Tibetan Canon” by Carola Roloff, Projekt Verlag 2020, Bochum/Freiburg. I never have been a feminist, and in the beginning of my Buddhist “career”, I did not think there is something like a “gender issue” in Tibetan Buddhism. But when later saw and heard women arguing against full ordination for themselves, believing what men had been telling them, I came to the conclusion: there is a gender issue indeed. And, thinking about paths and grounds, we know that culturally achieved hindrances are only given up at the path of seeing. And what else than a culturally inherited hindrance is the missing full ordination for women? Geshe-la quite sometimes emphasized, that the Vinaya needs to be understood in place and time. In our place and time, nothing else but full ordination for women is acceptable.

I sincerely wish, that the discussion about this will continue. I sincerely wish, that nuns express their will to receive full ordination. If they don’t, it will always be only men performing Sangha functions and deciding about women. Yes, women can study without being fully ordained, but they still cannot participate in the organization of the structure of the Sangha, they cannot perform the traditional Sangha actions belonging to the upholding of the inner discipline of the Sangha, if they are not fully ordained.

The Moss in the Garden: My Experience as a Monk in Graduate School 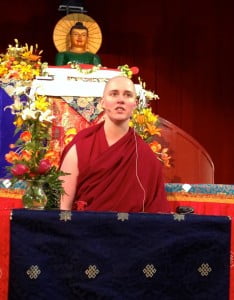 Teaching Each Other The Dharma