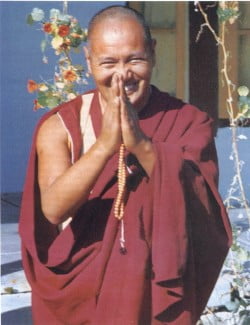 posted by admin
Therefore, if you sincerely want to be happy, if you are seeking liberation you should at least have the clean clear intellectual recognition that if accepting your own path automatically causes you to deny or reject other paths and those who follow them, your attitude is incorrect, the sign of an unbalanced mind.
Lama Thubten Yeshe

The Foundations of Tantra

What is a yana? It’s a vehicle – something that carries you from where you are to wherever you want to go; something that leads you somewhere. Boats and airplanes are vehicles, but they’re external vehicles. A yana is an internal vehicle, a mental attitude. For example, if you want to go to New York, the desire to be there is your vehicle; that’s what leads you to New York. Similarly, a yana is that which leads you to your spiritual destination.

Actually, yana is easy to understand. We’ve been following some kind of vehicle since we were born. The desire to drink your mother’s milk to preserve your body is a vehicle. This kind of desire allows your life to develop in an organic way. Getting an education, for example, is also a function of your vehicle. When you follow the Hinayana, you are mainly concerned with solving your own problems – you want to liberate yourself from your own confusion. Understanding the root cause of your suffering, you enter this path of self-realization. We call this kind of attitude Hinayana.

When some people, academics, for instance, talk about Hinayana, they interpret it as some kind of second-rate philosophy. You’ll often find books putting it down as a philosophical doctrine. That’s a mistaken attitude. Now, look at us Tibetan Buddhists. We’re always talking Mahayana this and bodhicitta that, but if we check our minds closely, we’ll find so much self-cherishing and “me, me, me, me, me” that – forget about calling ourselves Mahayanist – we don’t even qualify as Hinayanists.

Hinayana and Mahayana are not philosophy and doctrine. Of course, you can give philosophical interpretations of these paths, but their real meaning is psychological; they’re to do with states of mind. Realization is not philosophy. Yana is not to be found in a book; yana is mental attitude. If you have tremendous concern for your own problems and an intense desire to free yourself from them completely and attain individual liberation, or nirvana, your attitude is Hinayana.

But things may not be as simple as we think. We believe we are following a spiritual path; we think we are meditators. But if we really check carefully, we will see that following the path to liberation is not an easy job. First and foremost, we have to understand what is the root of samsara, cyclic existence – the wheel of life, death and rebirth. Even in this life we do so many things to be happy but we nearly always end up miserable. We go to the East seeking religion and end up miserable. We go to a center of one religion hoping to find relief and once more end up miserable. We go to a center of another religion hoping it will solve our problems and end up miserable yet again. We run from one spiritual trip to another, always ending up miserable. So we get fed up with religion and decide to be free, just like normal people. We party, go out drinking and dancing, have this girlfriend, that boyfriend, one partner after another, but all we get is more and more confusion. This is samsara, the circle of endlessly substituting one sense object for another, never finding satisfaction. We change, change, change, but basically it’s always the same thing.

Actually, we are like children. Children run from one thing to another, easily losing interest, easily distracted. We think children are, well, childish, but if we stop for a moment and cast a penetrating eye at our own trips, we’ll see how childish we ourselves are. Forget about past lives; forget about future lives; even in this life, how many trips have we been on? How many vehicles have we taken since we were born up until now? I can guarantee you it’s thousands upon thousands. And if you check honestly, you’ll find that practically all of them have ended in disillusionment, with no satisfactory conclusion. What do I mean by satisfactory conclusion? I mean a clean clear conviction, an indestructible determination that “Yes, this is right for me.”

But that’s not us. We’re like yoyos. You go to one religious center and the priest or guide or lama or yogi tells you that your philosophy is completely wrong and that his is the right way to think. So, you believe you’re wrong and try to think his way. Then you go to another place and they tell you, “No, that way’s wrong; you should think like this” and explain some other philosophy. Again you think, “Everything I just learned was wrong.” You’re tossed between right and wrong, wrong and right and finish up more confused than ever.

Now you come here and hear that from a higher standpoint, not only is the samsara trip wrong but so too is the nirvana one. Going to a meditation course to hear a spiritual guide talk about the path to liberation is supposed to be right, but we’re saying it may not be. Again, this just adds to your confusion and you’re no closer to a clean clear conviction than you ever were.

However, to enter the Hinayana vehicle, the least you should have is a realization of renunciation of samsara. That’s actually an incredible accomplishment. Someone who has realized renunciation of samsara is an object of refuge; someone to whom we should prostrate. It’s very rare to find someone who has achieved that realization. That’s why when I explain the Hinayana path you should not think I’m putting it down. Reaching the level where you have entered the Hinayana path is a very high achievement.

I hope, then, that the meaning of yana is now clear. As I said, you can give philosophical interpretations of the Hinayana and Mahayana paths. For example, certain Hinayana schools, like those in Thailand and Sri Lanka, require the monks to adhere to a very strict code of discipline. Monks cannot look women in the face and they certainly can’t touch them, not even to shake hands. If a monk touches a woman he has automatically broken a rule. In many ways, it’s a good rule, but from the Mahayana point of view, it actually depends on the mind; it depends on the attitude with which you touch the woman. If you touch her with a mind of grasping attachment, the only result of which is more conflict in your mind, that’s wrong. But if you touch her out of compassion, to benefit her in some way, we believe that’s not only acceptable but necessary.

Now, some people will look at these two teachings and conclude that Lord Buddha contradicted himself. One vehicle says no; the other says yes. There’s no contradiction; it depends on the individual mind. That’s what’s important. The consideration of individual need is a salient feature of Lord Buddha’s teaching. That’s why Buddhism accepts the validity of all other religions. We have no problem with Christians, Jews, Hindus or Muslims. We respect them all. We should respect them all. Different philosophies and doctrines are needed so that the widest possible variety of individuals can develop on the spiritual path. Different people have different levels of mind. The one path isn’t going to suit everybody.

Many people have a tendency to think that their own religion is right and that all the others are wrong. As soon as they adopt a particular faith they develop the concrete attitude, “I’m this.” They immediately build a philosophical wall around themselves. That position is wrong. If people’s going to church to pray to God bothers me, whose problem is that, mine or that of the church? From the Buddhist point of view, it’s obviously my problem. I’m simply agitating myself and destroying my clean clear mind.

This is an important point – a really important point. When you adopt a religion, philosophy or meditation practice for yourself, it should not bring bother and conflict into your mind. Unfortunately, human nature, the nature of our dualistic minds, often dictates otherwise. Our personality is such that as soon as we think, “I am this,” we immediately think, “Therefore he is that; she is the other.” We create this enormous divide between others and ourselves. This, in the terminology of Buddhism, is the dualistic mind.

Therefore, if you sincerely want to be happy, if you are seeking liberation – release from the self-cherishing mess of ego by destroying it completely – you should at least have the clean clear intellectual recognition that if your accepting your own path automatically causes you to deny or reject other paths and those who follow them, your attitude is incorrect, the sign of an unbalanced mind. This is your dualistic mind at work and is clearly the cause of suffering.

This Hinayana is incredible. It is a wonderful vehicle. Achieving even this level of development, which is based on renunciation of samsara, is a magnificent accomplishment.

The Mahayana is also a vehicle and, as I mentioned, has the two divisions of Paramitayana and Vajrayana. The former is also called Sutrayana; the latter, Tantrayana, Mantrayana or, often, simply tantra. If you remember the lam-rim teachings, you’ll know that developing the realizations of the graduated path to enlightenment from the perfect human rebirth up through emptiness, the six paramitas and bodhicitta through the ten bodhisattva levels is the way to develop the Paramitayana vehicle in your mind.

Mantrayana practice builds on that. Some people think that mantra just means reciting some words, like om mani padme hum. Actually, there are two aspects to mantra, relative mantra and real mantra. The mantra we concentrate on and recite is the relative mantra. Real mantra is the actual path, the path of tantric yoga. Practice of the relative mantra leads us into the vehicle of absolute mantra.

Advice on What to Do When a Sangha Person Dies (2) 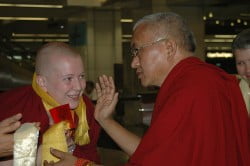 Advice For Practice—Answering the Question: Why are you Wearing Robes?