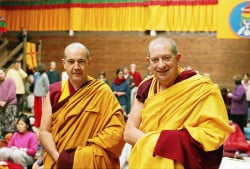 posted by admin
We know the general methods for protecting our mind: recollecting the imminence of death, the sufferings of samsara, the skeleton beneath the skin, the rotting corpse, honey on a razor blade. But we don’t really believe them.
Ven. Thubten Gyatso

One evening in 1975, on the hilltop at Kopan, my girlfriend suggested that we spend one last night together at a hotel where the sun can be seen rising over Mt. Everest. I pointed to the Pole Star, a point of light that remains unmoved while the entire universe revolves around it, and told her that that was my resolution to become a monk, and that we had better skip the night at the hotel. A few days later I received novice ordination from Lama Thubten Yeshe.

Three months later, at Tushita Retreat Centre, while introducing me to one of his older Western students, Lama Yeshe said, “This is Dr. Adrian, he has just become a monk. He has achieved the renounced mind of samsara.”

I took a glance at my mind and replied, “No, not yet, Lama.”

Lama Yeshe grabbed me by the shoulders and drew my face close to his. With a serious expression, he looked deeply into my eyes and said, “Good answer, ‘not yet.’ It will take a long time.”

In 2002, out of the blue, I received an email from Kyabje Lama Zopa Rinpoche warning me that if I went to Korea, as was my plan, there would be danger of my disrobing. Between 1975 and now I have seen many, many monks and nuns come and go. I have also had to deal with my own mind and, even now, as I wonder what the Korean beauty would have looked like (I didn’t go), my reply to Lama Yeshe’s statement remains, “Not yet, Lama.”

With no renunciation, there is no bodhicitta, definitely no concentration and therefore no wisdom. So, after nearly 28 years as a monk, I have yet to enter the Buddhist path. It does take a long time. When am I going to stop looking at eyes, hair, breasts and bottoms with desire? I once heard a family friend, a good Roman Catholic in his seventies, pondering the same question. During a dinner at Nalanda Monastery in France, with Lama Yeshe, Dakpo Rinpoche, Sogyal Rinpoche, and Gonsar Tulku present, a Benedictine monk told the group that the age of 48 was the danger time for monks at his monastery to disrobe. They were still young enough to ‘have a chance.’ He asked what methods Buddhism had to deal with the energy of desire. Looking at the bottle of wine he had brought along to the party, I thought the answer was rather obvious, but Lama Yeshe replied, “We meditate deeply on the suffering of life and, in tantra, there are special methods to transform the energy of desire into the path.” The best aid to generating renunciation is our vows, especially the small ones: Always wear the robes. Do not be alone with the opposite sex. Keep your eyes on the path ahead. Avoid distracting movies. I was once at Tharpa Choeling, Geshe Rabten’s centre in Switzerland. His monks were like the PhD’s of Western monasticism, all speaking fluent Tibetan and knowing the profound teachings. Intellectually, they could run rings around us Lam Rim wallahs from Kopan. About seven monks were crowded into the room of one of the gelong’s who had a television set. As the movie became more and more raunchy, I went out onto the verandah in disgust. There was a breathtaking view of the full moon rising over the Swiss Alps and Lake Geneva, so different to the atmosphere inside, and then left for my own room. Within a few years every one of those learned gelongs had disrobed.

Next, don’t gossip about sex, even as a joke. Don’t get involved in discussing sex when you are counseling. For monks, it has been my experience that when women start describing the sexual inadequacy of their husbands, more often than not they have you in their sights as a replacement. Don’t even talk about Lam Rim alone with persons of the opposite sex. I know several monks whose downfall began with making frequent appointments to ‘teach Dharma’ to young ladies. We know the general methods for protecting our mind: recollecting the imminence of death, the sufferings of samsara, the skeleton beneath the skin, the rotting corpse, honey on a razor blade. But we don’t really believe them. We think we are not going to die today; we think sensual pleasure is pure; we think our desire is transcendental love; we think we can take the honey and avoid the blade. Then there was the American monk who declared to His Holiness Serkong Rinpoche that he was ready to begin practice with a consort. Tantric fools like him are the most deluded of us all.

Ever since I took ordination I have made it a practice to ask high Lamas if they think Buddhist monasticism will catch on in the West. The universal answer, including the one given by His Holiness the Dalai Lama’s response, has been, “We’ll have to wait and see.” 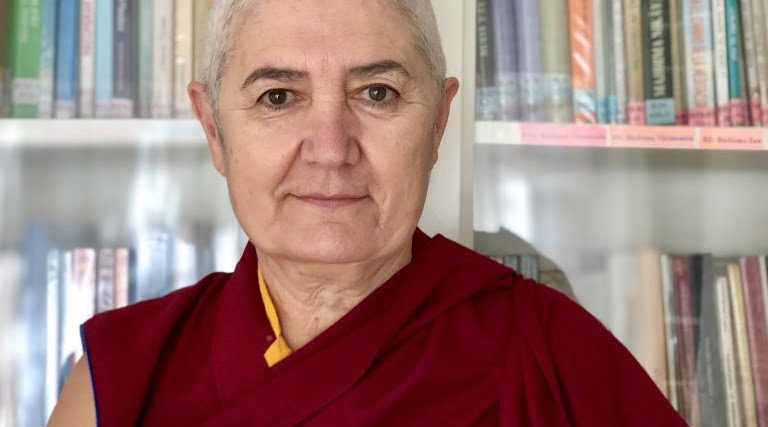 Working on Yourself for Others