Skip to content Skip to sidebar Skip to footer
Close International Mahayana InstituteSangha Jewel – A Community Of Buddhist Monks And Nuns
05
July
posted by admin
As you know, just because you’re a monk or nun does not mean that you’ve reached enlightenment. It simply means that you have gained an understanding of the nature of samsara and have decided to work continuously to develop within yourself the everlasting, peaceful path of liberation. That’s all. Getting ordained doesn’t give you immediate control over your mind; it doesn’t mean you are completely liberated. It’s not like that.
Lama Yeshe

Shortly after I took over as director of IMI in May 2007, I was asked to review the ordination policy of FPMT. In consideration of recent developments with the Office of His Holiness the Dalai Lama, the discussion on ordination at the Geshe Conference in December 2006, and the concerns of the larger monastic and lay community, the task was to update and seek to implement guidelines for ordination within the larger mandala of FPMT centers.

What a daunting task. On the one hand, the teachers (Tibetan) who are ordaining their students (non-Tibetan) come from a long tradition of monasticism (roughly one in three men in Tibet was a monk). The students, on the other hand, come from a culture that has yet to reach consensus on whether to value monasticism as necessary in the practice of Buddhism.

Our teachers’ practice as monastics continues to inspire many of their students to take ordination. The teachers grew up in the monastery with the supporting infrastructure for nurturing an appreciation of the vows, and embracing a life of study and practice. While it was not necessarily an easy life with its rigorous discipline, the monastic life was valued by the lay community upon which the monasteries relied for support. When you ordained, you were accepted into the monastic community and its encompassing social support. These support systems sustained the entire monastic community while its members faced the challenge of learning to live by the vinaya.

Certainly the situation was not without its flaws. As in any community, there are some whose conduct is less then becoming. Yet, overall, we can clearly see how the monastic life has preserved the ongoing lineage of Buddha’s teachings, and produced some realized beings. We continue to be inspired by their actions of body, speech and mind, slowly and steadily bringing us along the Buddhist path.

So much so, that many of us are inspired to take ordination ourselves. Our teachers praise the benefits of living the life of a Buddhist monk or nun. Yet what does it mean for those of us who are so inspired? We have no infrastructure to support the ordination of monks and nuns. Although we haven’t maintained accurate historical statistics to this point, it is safe to say no more than 25 percent of those ordained are able to maintain their ordination for 10 years or more.

There are very few communities where we can go once we ordain to learn how to live the life of a monk or nun. There is no developed system of support for the basic needs of those who wish to ordain; many indenture themselves to a Dharma center in order to protect their vows and satisfy their basic needs. Others reach the decision to support themselves in the conventional lay world of work, which slowly degrades the very purpose for taking the vows in the first place.

The disparity of support for the monastic way of life within these two cultures must seem obvious by now. So how do we go about developing an ordination policy that seeks to integrate the reality of the two?

The vinaya itself helps to establish some of the criteria necessary for ordination. One is the wish to turn away from the “householder” life and to take on the signs of the “ordained” life, so some aspects are easy to distinguish.

And here is where it sometimes gets sticky – and only sometimes. From the teacher’s point of view (and here we are referring to our Tibetan teachers), if he is requested, he feels bound to honor that request, even if he may not feel the candidate is suitable for the life of a monk or nun. How often are we told the benefit of holding the monastic vows “even for five minutes”? In the traditional monastic setting, this would sort itself out naturally and rather quickly. In our culture, however, “yes” means “yes,” and not usually “maybe not a good idea”.

Again I emphasize it is important for us to respect the wisdom of our teachers in their decision to ordain or not. With experience we learn to trust in the wisdom of our teachers. Perhaps the candidate may not be an “ideal” candidate for ordination (as is my own case). In time, however, we have seen the benefit ordination has had for so many members of our community. And these are only the visible indications of body and speech without any understanding of the long-term benefits for the individual in future lives.

And not everyone is going to be a good monk or nun from the beginning. In retrospect I myself can only laugh at how ridiculous I must have appeared when I began my life as a monk. As Lama Yeshe said in his first talk to Western monastics:

As you know, just because you’re a monk or nun does not mean that you’ve reached enlightenment. It simply means that you have gained an understanding of the nature of samsara and have decided to work continuously to develop within yourself the everlasting, peaceful path of liberation. That’s all. Getting ordained doesn’t give you immediate control over your mind; it doesn’t mean you are completely liberated. It’s not like that.

We are also asking the teachers to take responsibility in this relationship and help the student’s transition into the monastic life. Traditionally, the teacher then looks after his students, both spiritually and physically.

As many of us have been taught, traditionally one makes offerings to the teacher. Here again we have some cultural disconnect, although the situation is shifting in different ways. With many of our teachers, although they have taken on the responsibility for the spiritual needs, they have not taken on the responsibility for the physical care of their students. In many cases, this is because the teachers are not provided the means to do so by the communities they serve. For some teachers, sometimes the responsibility of their relationship with their home monastery overshadows any ability to care for the needs of the students they have ordained.

And in a clear indication that he is concerned about the situation of the Western Sangha, His Holiness stopped in the middle of this year’s ordination ceremony to ask whether all of those taking ordination had a stable situation to go to after ordination. Through his office, the Dalai Lama has also offered to support nuns he has ordained for a period of two years at Thosamling, a nunnery outside of Dharamsala.

IMI is working to help establish a monastic education program that will help train our monks and nuns. We are also working to improve our communications with teachers and students in order to help facilitate ordination and the transition to monastic life. Additional financial support is being sought and offered to help monks and nuns begin their new lives practicing and serving in new communities.

More importantly, IMI is emphasizing the value of community in the transition into monastic life. Traditionally, one enters a monastic community when one ordains, and there have been successful models in other Buddhist traditions coming to the West. Nurturing a supportive monastic community is critical to our survival.

IMI is also working to create open and ongoing dialogue with the lay community to ensure an understanding of the value in maintaining the monastic tradition.

The transition of Buddhist monasticism to the West has certainly started, but is only beginning to take root. It may take a few generations, but the monastic tradition is so deeply important to the integration of practice for the Buddhist community that we can have it no other way.

In Praise of Vinaya it states: “As long as the complete vinaya, the supreme treasure, abides, the lamp of the Dharma will shine.” The “complete vinaya” refers to all the rules of moral conduct for lay people and for fully ordained monks and nuns. In other words, if the vows of fully ordained monks and nuns are no longer held by anyone, the Dharma itself would no longer exist. 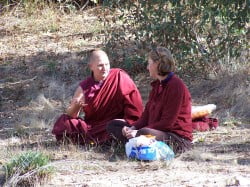 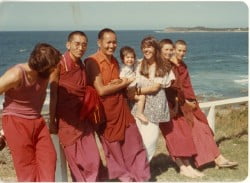