You might be a monk or a nun for a few years or a few months, but are then unable to continue. At Kopan I spoke about Bob Thurman, the first Western person ordained by His Holiness. He then returned to New York and the next day he disrobed. That’s what I heard, but then somebody said that it wasn’t quite like that, that it was after one month or one year that he disrobed. It was after a month, I think, not a year.

So you try to be a monk or a nun for a few months, or a few years, but then you are unable to continue. You think, “Oh, this is too difficult! I’d better change my life—lay life is easier.” That is because you are not thinking of karma. Your worldly concern, your concern for this life’s pleasures, is very strong; non-virtue is very strong. If you think of karma then of course you will stay ordained. But you are not thinking of karma. You think, “Lay life is much better, much easier. I have so much freedom.” But you actually have freedom in negative karma, not in virtue. It’s not freedom in the path to achieve liberation, but in the opposite of that. You call it freedom but it’s actually the cause of samsara, the cause of the lower realms. You call it freedom because you are following what your attachment wants.

You are making a mistake: something that is not freedom you call freedom; something that is freedom you think is not freedom. It’s similar to what I often mention in relation to the I: the I that exists is what exists in mere name, but you never think that. You never think about how to understand it or what it is. The I that doesn’t exist is the truly existent I, the real I. Not even an atom of that exists, but you think that it exists. It then appears to you, and you trust one hundred percent that it exists. But it is the total opposite. What you believe exists doesn’t exist; what you believe doesn’t exist (the merely labeled I, the I that is totally empty from its own side) exists.

Real freedom is living in the precepts, the vows, to achieve liberation from samsara. While lay people also have many types of morality to practice, this especially applies to an ordained person. Your having more worldly concern than renunciation is what makes your life so difficult. Because you have so much worldly concern, your renunciation is hardly anything. That’s what makes your life so difficult—not Buddhadharma, not the practice of morality. Your mind becomes this way because you have more worldly concern, more attachment, than renunciation. You have no idea what is bothering you so you think the problem is Dharma or being ordained. You don’t know that it’s your mind that is the problem. The problem is that your mind is filled with worldly concern and not with renunciation, not with Dharma. Your attachment wants what it wants, and you call that “freedom.” Your connotation of freedom is the freedom to get what attachment wants, not what renunciation wants. Renunciation of samsara is the free mind.

So, you are totally confused. You call it “freedom” when the sticky mind of attachment gets its object of attachment. In reality it is not freedom. It is the cause of samsara, the cause of the lower realms, where the length of life can be eons. What you call “freedom” is totally wrong. It is like the clear example I gave you of the I. The real I that you believe in is nonexistent, but you think that the I that exists in mere name, that is empty from its own side (which all the buddhas realize is truth) doesn’t exist. It is exactly the same here in regard to freedom. Much of the Western concept of freedom is like that, because the motivation is wrong, because there are mistakes in the motivation.

His Holiness has said if the Theravadins, Chinese Mahayanists and Tibetan Sangha all meet together and decide to accept it, the gelongma ordination could be given. All three groups need to meet together in a big Sangha meeting to decide this. This gathering of all three traditions that His Holiness wants hasn’t happened yet. If they accepted, then the gelongma vows could be given. But the meeting hasn’t happened. The gelongma ordination didn’t happen even in Tibet. (I thought I heard that it was there for a short time at the beginning, but it was very difficult and they were unable to keep the lineage, but I’m not a hundred percent sure of that.)

Of course, if you are thinking about the vows, there are thirty-six getsul vows. There are so many getsul vows to keep; then on top of that, there are the bodhisattva vows, with eighteen root vows and forty-six secondary vows to protect; and then there are the tantric vows, with the fourteen root vows and the secondary ones, the eight bompos, and then the vows related to mother tantra. It’s very difficult to keep the subtle vows. Even if they have not taken other initiations, most people have taken the Kalachakra initiation, so there are many vows to keep. If you’re thinking of the vows in regard to controlling the delusions, the cause of samsara, so that you can become free from samsara quickly, there are so many vows to keep and to practice. So, you are not thinking of that; even when you are taking initiation, you are not thinking of that.

There are 364 gelongma vows. There are many people who are really keeping the gelongma vows—Thubten Munsel, for example. Her guru is the Chinese abbot who started the City of Ten Thousand Buddhas north of San Francisco. Before her guru passed away, he asked her to be the abbess of the nunnery there.

After she met me, she changed to Tibetan robes then stayed at the Aptos house. Munsel really follows the vows. With gelongma vows there is the restriction that you can’t travel at all without another nun. If you go outside alone, you incur a remainder (lhagma), which means that you break a secondary vow, not a root vow. Since Munsel found it difficult to get any of the other nuns to go shopping with her, she took the dog, Om Mani Padme Hung, along with her in the car. When no nun could come with her, she took the dog with her.

It is necessary to pay attention to the vows. Doing like that is very good because you’re thinking of the vows. Otherwise, some of our nuns in the early times (I’m not going to mention any names) took the gelongma vows just to get respect from others or to get a higher seat as a gelongma. It wasn’t a question of keeping vows—not at all. It was just to get respect. It was all eight worldly dharmas. It was worldly concern, attachment to the pleasures of this life. It seems very funny to me to become a gelongma so that other people respect you because you’re a gelongma and you sit in a higher place. There is no thought of keeping the vows at all!

Then, it could be that your reason for taking gelongma vows is just to fight for women’s liberation. Real liberation is living in the five or eight vows for lay people. Real liberation is renunciation, renouncing attachment to samsara, to the samsaric perfections of this life and of future lives; then bodhichitta, which brings enlightenment, great liberation; and then emptiness, which helps for both. But there is no thought of that practice, which is the real cause of liberation. There is no thought of even liberating yourself from samsara. It’s just the thought that women should have the same power as men. There’s no practice of what really liberates you from samsara, so that you can then liberate others. There is no thought of that. It’s only political. There are many other things in the world that fight for women’s liberation, and taking the gelongma vows for that reason is just politics. Taking gelongma vows for political reasons is very strange. It doesn’t become Dharma; it becomes partisanship, attachment to women’s liberation.

But whether there’s a lineage or not, if you are keeping the 364 vows, wow! Even if there’s no lineage but you are keeping the vows, you are controlling the cause of samsara, delusion and karma. If you are really thinking of the precepts, that is brave! Really thinking of the thirty-six getsul vows is brave. Then there are the bodhisattva vows and the tantric vows—the ones you never think about. Even if you have taken them, you never think about them. How’s it possible? The aim of taking bodhisattva vows is to achieve enlightenment and the aim of taking tantric vows in a Highest Yoga Tantra initiation is to achieve enlightenment as quickly as possible, in the brief lifetime of a degenerate time. You can then free other sentient beings and bring them to enlightenment as quickly as possible.

Excerpt from a teaching given by Lama Zopa Rinpoche in Bendigo, Australia, on May 7, 20018; transcribed by Ven. Joan Nicell; checked and edited by Ven. Ailsa Cameron. 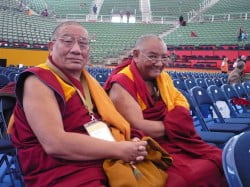 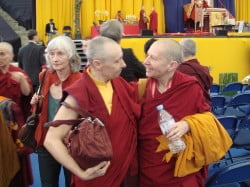